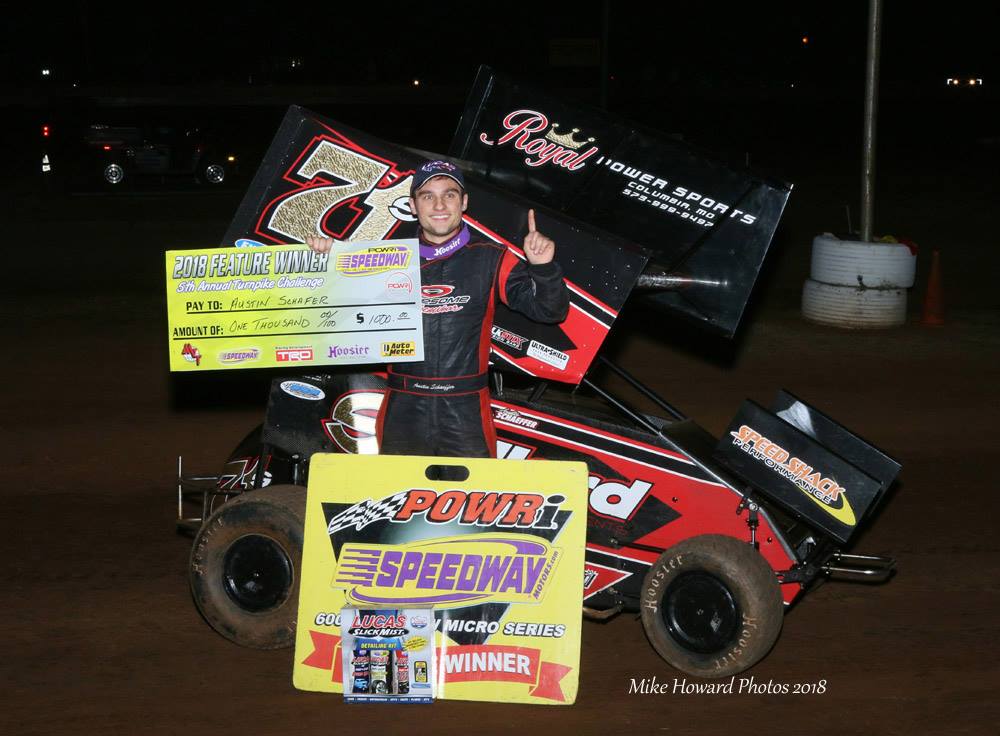 (Mike Howard Photo)
Oklahoma City, OK | March 27, 2018 – Starting his pursuit of the POWRi Micro championship on the right foot, Austin Schaeffer kicked off his 2018 campaign over the weekend with a wildly successful trip to Oklahoma City’s I-44 Riverside Speedway. Taking on 40+ of the nation’s best at a track he had never attended, the Columbia, Missouri resident began his weekend with a solid top ten finish and closed it with an emotional career first. Starting from the outside pole of Saturday’s “Turnpike Challenge” finale, the 21-year old wheelman turned in a near perfect 20 laps atop the cushion. Working through lap traffic with ease and running away from some of the sport’s most talented, Schaeffer dominated the main event for what was his first-career victory with the premier POWRi Outlaw Micro League.

“Honestly, I’m kind of speechless,” said Schaeffer in victory lane on Saturday night. “This is only the second race on this car and I’ve never driven anything like it before. Between the ladder and power steering, it is definitely a different feel for me. Frank Galusha with Stallard, Joe B. Miller with this monster of a power plant, and so many others, I can’t thank everyone behind us enough. My dad flew in from Atlanta, Georgia to watch me race, so I’m glad I got this done for him. These are the best guys in the country that race on a weekly basis and to win tonight against guys like Frank Flud, just to be in the same ballpark as him is gratifying.”

Opening his 2018 season on Friday night, Schaeffer ended up in a B-Main following a fourth-to-third run in a heat race set that didn’t allow much passing. Winning the B-Main with ease from third, Schaeffer continued his recovery with a strong feature charge from 16th-to-eighth in the main event. Competing full-time with the series this year, nights like Friday will prove crucial in the long run for a championship as Schaeffer’s recovery to a top ten bid allowed him a strong points night.

Returning to the I-44 Riverside Speedway 1/5th mile on Saturday night with a clean slate, Schaeffer quickly got off to a hot start in his Stallard SST No. 71S. Driving from sixth-to-second in heat race action, the Missourian placed himself second in passing points and earned the outside pole of the main event.

Falling into the runner-up position at the drop of the green flag, Schaeffer bided his time in second as he continually worked the high side with the leader rolling the bottom. By the fifth circuit, a full-fledged battle for the top spot broke out as Schaeffer pulled side-by-side with Holden Anderson. Storming into the lead on lap seven, Schaeffer’s new Speed Shack Performance bullet proved mighty fine as he powered around the outside of Anderson and started to stretch his lead.

Running away with the lead, Schaeffer’s ultimate test would come on the final restart as micro sprint legend, Frank Flud, lined up on his rear bumper. Putting an exclamation point on a career night, Schaeffer proceeded to yank Flud on the restart and drive away with his first-career POWRi Micro victory in dominating fashion.

Looking to carry his momentum from this weekend’s thrilling win, Schaeffer’s next trip to the track will be in two weeks as he returns to racing with the POWRi Outlaw Micro League. Tackling the 1/4 mile of Jacksonville Speedway in Jacksonville, Illinois, Schaeffer will strap back into his No. 71S for a two-day show on April 6th and 7th.