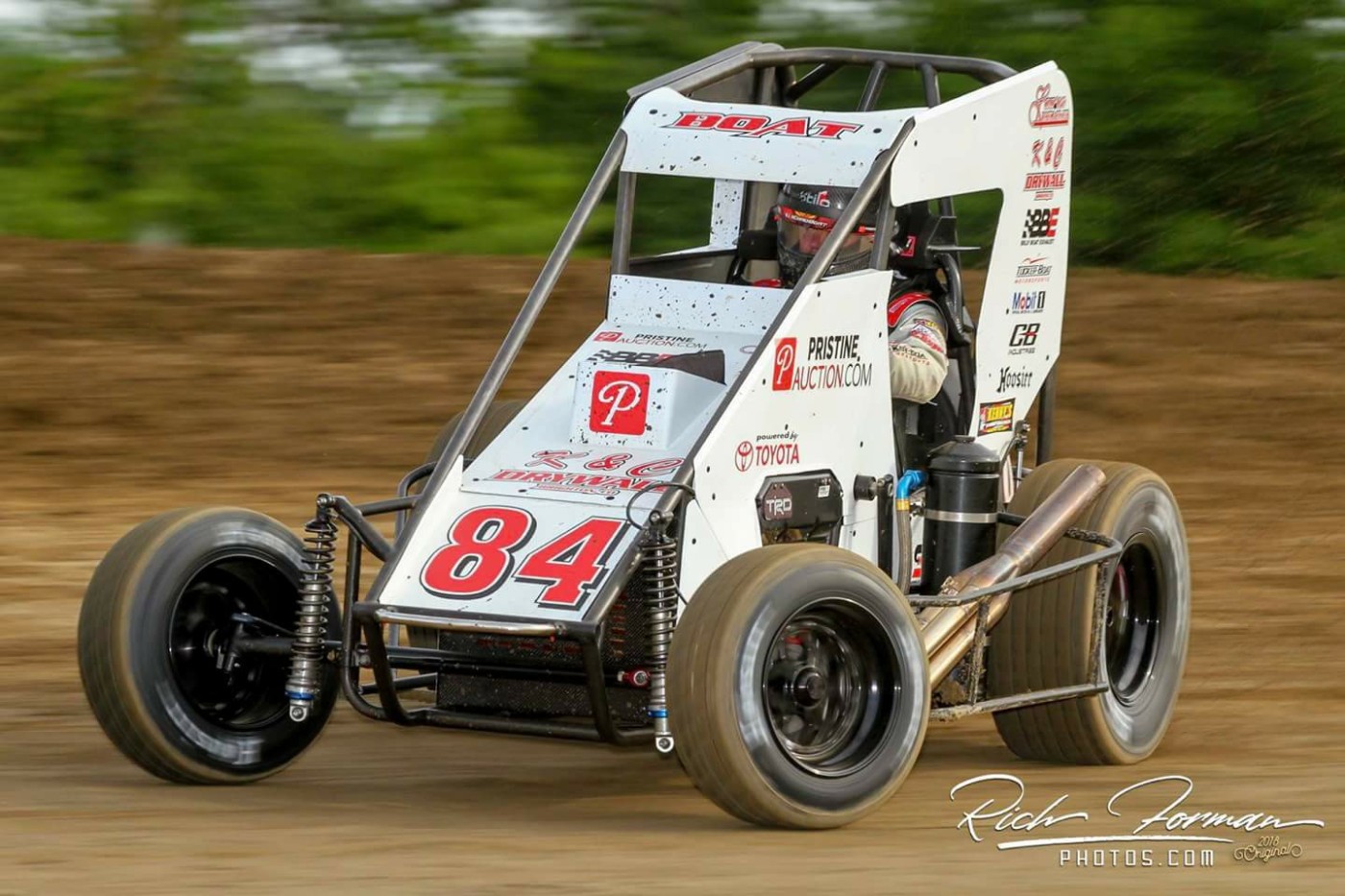 (Rich Forman Photo)
Putnamville, IN | June 1, 2018 – Earning his first-career triumph in the Indiana Midget Week series, Chad Boat proved undeniable last night at Lincoln Park Speedway as he welcomed every challenger with open arms and dished them all away. Trading slider after slider with early leader, Tanner Thorson, the duo swapped the lead every corner for nearly five laps at the midway point until the Phoenix, Arizona native secured the top spot for good on lap 17. Playing defense in the closing stages, Boat encountered a new battle for the lead as Justin Grant entered the picture. Fending him off in the final laps, Boat held on to score a thrilling victory at LPS as he nabbed his first-career IMW triumph aboard the Pristine Auction, K&C Drywall, Lawson Rock & Oil, Spike/Toyota No. 84.

Scoring heat race victories in the ten-lap races would be the foursome of Holly Shelton, Logan Seavey, Brayton Lynch and Tanner Thorson. Moving on from the B-Main would be Brady Bacon, Matt Moore, Jason McDougal, Ethan Mitchell, Tanner Carrick and Sam Johnson.

Rolling out for the 30-lap feature in hopes of outrunning Mother Nature’s dooming skies, the 24-car field was led to green by Thorson and Boat on the front row. Shooting into the early lead, Thorson guided the Tri-C Motorsports, Spike/SR-11 No. 3C to the point as Boat fell into second and the rest of the field jockeyed for position. Time after time in the beginning stages, Boat would built up a battle for the lead and begin to pressure Thorson, ultimately for a caution to halt his momentum again and again. However, following a lap 10 restart, Boat was finally given enough time to mount his bid for the lead and he made it worth his time.

Sliding Thorson for the lead, Boat took command of the field on lap 17, but not without some resistance from Thorson. Coming back at Boat for the top spot, Thorson launched a turn one bomb in hopes of regaining the point. For four consecutive laps the narrative proved repetitive, with Thorson chunking a slider into turn one, Boat checking up, driving down, and crossing him over before completing his own slider into turn three to retain command. The battle would come to a halt on lap 20 as the caution flew and now eyes shifted to the battle for second on the restart.

Overcome with a three-car assault from the Clauson-Marshall Racing group, Thorson’s runner-up bid came under attack as Justin Grant, Tyler Courtney and Zeb Wise turned the heat up. Knocking out two birds with one stone, Grant mounted a daring move into turn three after the restart to score second by storming past both Courtney and Thorson at once. Reeling in Boat in hopes of stealing away the late-race lead, Grant was hot on his heels as the duo noticed the five-to-go signal.

Setting up for his challenge with three to go, Grant looked poised to throw a turn three slider at Boat until the door was abruptly closed on entry and Grant began exploring other avenues to attack. Darting to the massive LPS curb built atop the quarter-mile surface, Grant went high in turns one and two in hopes of screaming around the outside, but a near-costly mistake sent the No. 17BC sideways before Grant luckily saved the machine and kept it running, but not before Boat was able to sneak away.

In the end, Phoenix, Arizona’s Chad Boat would lead the final 14 laps aboard his Pristine Auction, K&C Drywall, Lawson Rock & Oil, No. 84 Spike Chassis powered by Toyota Racing. The Lincoln Park Speedway triumph was Boat’s first-career Indiana Midget Week win, the seventh of his USAC National Midget career, and first victory outside of the month of August. Following a 13th-place run at Montpelier on Tuesday night, Thursday’s score at LPS was just what the doctor ordered for Boat as he re-entered contention for the Indiana Midget Week title with a fire burning bright inside the Tucker-Boat Motorsports crew.

Trailing Boat to the line with a second-place finish from 11th was Justin Grant in the Clauson-Marshall Racing, NOS Energy Drink, Spike/SR-11 No. 17BC. Scoring his second-straight podium finish, Tyler Courtney nailed down a third-place finish in his CMR, Driven 2 Save Lives No. 7BC. Making a last-lap pass to score the fourth position, another CMR entrant of 15-year old Zeb Wise finished at the front with his Priority Aviation No. 39BC. Rounding out the top five after leading early on was Minden, Nevada’s Tanner Thorson in the fifth spot. Closing out the top five was Spencer Bayston (6th), Logan Seavey (7th), Rico Abreu (8th), Ryan Robinson (9th) and Jerry Coons Jr. (10th).

Through two rounds with three races remaining, Tyler Courtney and the Clauson-Marshall No. 7BC top the Indiana Midget Week point standings with 149. Trailing Courtney in second and behind by 20 markers is Tanner Thorson and the Tri-C Motorsports No. 3C with 129. From second to tenth, you could throw a blanket under the battle in points as they are separated by just 19 points. Closing out the top ten in points behind Courtney and Thorson is Logan Seavey (128), Zeb Wise (124), Chad Boat (120), Spencer Bayston (118), Kevin Thomas Jr. (113), Rico Abreu (112), Jerry Coons Jr. (110) and Justin Grant (110).

Tonight, the third round of Indiana Midget Week takes us to the red clay of Bloomington Speedway. Located in the heart of Hoosier country with Indiana University right down the road, Friday night’s appearance is sure to offer up some excitement as we move to the weekend slate of IMW. Walkapedia will have live updates all night long on Twitter at @Walkapedia_, or you can watch LIVE at http://www.speedshift.tv.