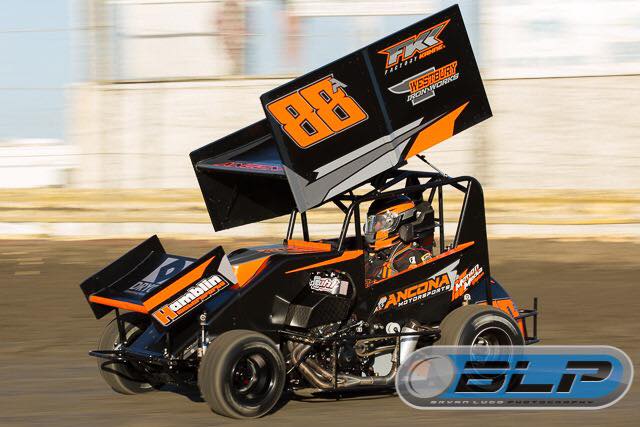 (Bryan Lugo Photography)
Concord, CA | February 5, 2018 – Between full-time action in California’s Super 600 ranks, limited competition in the Non-Wing division, and racing the biggest micro sprint shows of the year in Washington and Illinois, Joey Ancona will have a full plate entering the 2018 season. A 13-year old rising star who burst onto the national scene with his dominant Restricted season in 2016, Ancona has since transitioned into the premier micro sprint class and immediately found success. After earning six victories and a track championship in his rookie season in Super 600 last year, the Concord, California native made himself an imminent threat for wins week in and week out. Now, heading into a new year, Ancona plans to compete for the King of California title, track championships at Plaza Park Raceway and Lemoore Raceway, the prestigious California Speedweek, the $10,000/Win Clay Cup Nationals in Washington, and the $10,000/Win High Banks Hustle in Illinois, all while mixing in a little Non-Wing racing.

“Last year, Joey went above and beyond as he exceeded our expectations for his first year in Super 600,” claimed Ancona’s mother, Shari. “He was only 12 at the time and won six races and even a track championship. This year, we are going to be running more events, running full-time at Plaza Park and Lemoore, and traveling to some big shows. Joey’s goals for this year are simply to contend for more feature wins, find success in the Non-Wing class, and hopefully dabble into the sprint car ranks.”

On the heels of a phenomenal 2017 season, Ancona brings in a boat load of momentum from his rookie year in the “Golden State.” The Concord native had always been an overwhelming force in the Restricted class, but the big jump to Super 600 is not always as easy as the young man made it seem. Scoring six victories and a track championship, Ancona made his presence felt on a weekly basis las year. Ending their season on a high note, Ancona qualified for his first-career A-Class main event at the Tulsa Shootout as a cherry on top to their 2017.

Heading into 2018, Ancona Racing has big plans for 13-year old Joey. Primarily, he will compete full-time at Plaza Park Raceway (Visalia, CA) and Lemoore Raceway (Lemoore, CA) in the Super 600 division as he chases a championship sweep. Also competing in the eight-race King of California slate, the unique series will take Ancona to Plaza Park, Lemoore, Delta Speedway (Stockton, CA) and Dixon Speedway (Dixon, CA) each two times. Along with his bid to become the King of California, Ancona will tackle the quickly-growing California Speedweek in June. Outside of his full-time plans in the Super 600 class, Ancona will dabble in the Non-Wing division throughout the year as well.

Traveling outside of the “Golden State,” for the two highest-paying winged micro sprint races in the country, Ancona will go toe-to-toe and wheel-to-wheel with the nation’s best as he heads to Washington and Illinois. Making his debut at the prestigious High Banks Hustle at Southern Illinois Raceway in Marion, IL, Ancona will be attempting to qualify for the $10,000/Win, $500/Start main event from June 14th-16th. One month later, the team will head north as Joey battles in another $10,000/Win, $500/Start premier event. Slated for July 19th-21st, Ancona will square off in the Pacific NorthWest as he runs the Clay Cup Nationals at Deming Speedway in Deming, WA.

You can follow along with Joey’s progress and results throughout the 2018 season here on Walkapedia as we cover his continued growth and rise throughout the sport!