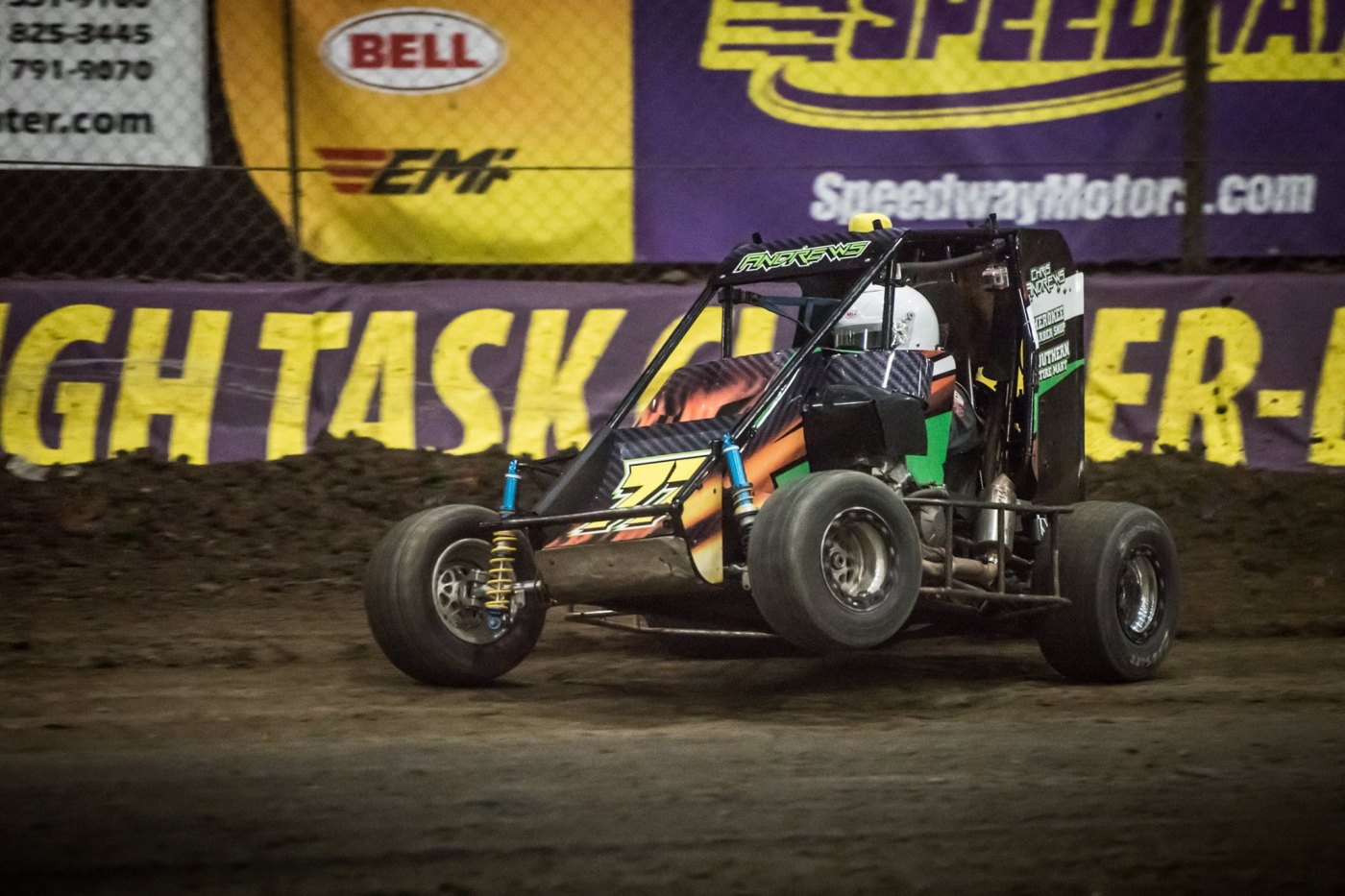 (Dylan Duvall Photography)
Tulsa, OK | December 20, 2017 – After a one-year hiatus from the Tulsa Shootout, one of the events most legendary competitors is returning to racing next week. Chris Andrews, a Tulsa, Oklahoma resident himself, has amassed one of the most historic Shootout stat lines that includes three Golden Drillers and 10 top-five finishes in 22 feature starts. Following his year-off at the 32nd running, Andrews is slated to return at the 33rd edition of the Lucas Oil Tulsa Shootout in full force. Sticking with longtime car owner, Justin Blevins, the dynamic duo on the wrenches and behind the wheel will be a major force in four classes, as they tackle the quadruple duty lineup of Winged Outlaw, Outlaw Non-Wing, Stock Non-Wing and A-Class.

An owner-driver pairing for over a decade now, Andrews and Blevins have won some of the nation’s biggest events as a team. In 2012, the duo earned the highest-paying victory of their partnership at the Mike Phillips “66” Memorial at Southern Illinois Raceway. A $10,000/Win event, Andrews and Blevins went undefeated at the Marion, Illinois 1/8th mile that weekend, winning every single race they competed in. In 2016, the Oklahoma tandem took the “Golden State” by storm, winning the California Speedweek Non-Wing championship while collecting six victories in just one weeks time. An $8,000 triumph at their home track of Port City Raceway followed in October of 2016 with the Outlaw Nationals. The most recent “crown jewel” achievement came in August of this year as the duo dominated at SIR once again, this time taking a $5,000 Terry Sprague Memorial victory back home.

With all of their success on the road and across the country, the Tulsa Shootout remains the only missing piece of the puzzle for the duo. While Andrews has won three Golden Drillers with his father in Non-Wing competition, a triumph for Andrews and Blevins at the Shootout has eluded them in heartbreaking fashion. On numerous occasions they have been close to smelling the roses and popping the champagne, but the stars were just not aligned. In his 22 feature starts, Andrews has made most of them in the Winged Outlaw class with Blevins, earning seven starts with him while claiming five in the other three divisions.

In their most recent appearance inside the Tulsa Expo, Andrews and Blevins ran second at the 2016 Tulsa Shootout. Falling short to Brady Bacon, Andrews trailed him for nearly all 55 laps and hounded the USAC Superstar time and time again, but fell just short with a strong runner-up bid. In 2014 and 2015, they earned back-to-back top ten finishes with a fourth and eighth, respectively. Among several other attempts at the headlining main event, the most troubling run came at the 25th annual edition in 2010. With an elusive victory just seven laps away and the lead in firm control, Andrews lost power and pulled to the infield as he relinquished the point.

Coming off another solid season together, the duo will look to get the monkey off their back and triumph together at micro sprint racing’s biggest event. With entries in Winged Outlaw, Outlaw Non-Wing, Stock Non-Wing and A-Class, Andrews and Blevins are sure to be heavy contenders in each and every division. If he is able to earn three feature starts, Andrews will pass the late Donnie Ray Crawford for most Tulsa Shootout feature starts in the Internet Era (2004-Present). Crawford holds the record at 24 starts, but Andrews is close behind at 22 of his own.

Beginning on Thursday, December 28th with practice and heat races, the 33rd edition of the Lucas Oil Tulsa Shootout will run through Sunday, December 31st when a new batch of Golden Driller winners are crowned. Walkapedia will continue our Tulsa Shootout coverage all week long with countless previews leading up to the race as we highlight this year’s contenders.